Can I Change my Life?
Growing Life, Growing Lines

If you are wondering: "Can I change my life?", you will be interested in Jason's story. Some details cannot be seen on the small illustration below, so click on the hand picture to view a larger version in a new window.

Jason works in a nursery. His job consists of turning tiny seeds into blooming plants. As shown by his coarse texture (the ridges covering the whole hand which, in this case, are far apart and very visible), he enjoys physical work, mostly outdoors, and has a lot of vitality and strength. However, because of his coarse texture, he may sometimes lack mental refinement. For instance, while having a very big heart (reflected by his long and curved heart line, the horizontal line below the fingers), he often doesn’t know what to say, or he says the wrong thing and ends up hurting the people he loves without even noticing it.

Jason often feels inadequate because of his lack of schooling and his self-esteem is quite low. However, he is very smart and has strong convictions: his head line – the horizontal line crossing the centre of the palm, which shows the way he thinks – is very long and uninterrupted.
Change my life! 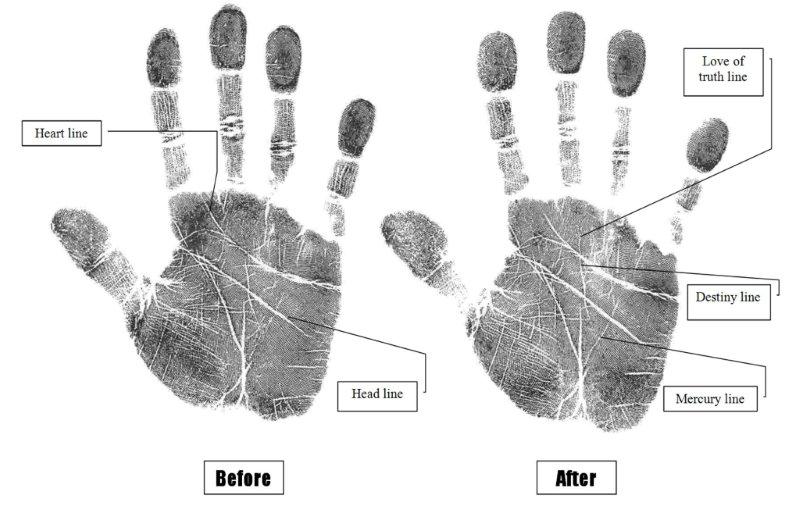 Five years separate the Before and After prints. Some of the changes appearing on the second print are quite remarkable. Two new lines have appeared: a love of truth line and a Mercury line. What does it mean?

The destiny line, which is the vertical line crossing the middle of the palm, is turning into a love of truth line. When the destiny line goes past the heart line, starting there or continuing from an existing line, it is called a “love of truth” line.

The destiny line shows your determination to set and achieve your goals. The love of truth line gives depth to these goals. When the line continues beyond the heart line, your life objective takes a spiritual dimension. You are not satisfied with the superficial aspects of life. Because of this realization, you are more open to suggestions and even criticisms since you know they are for your own good.
Change my life!
The Mercury line is the line of self-expression and communication. A well-formed Mercury line starts at the bottom centre of the palm, and travels towards the little finger, or Mercury finger. It allows you to take all your inner talents and express them to the world.

On the Before print, there was no love of truth line, and the Mercury line was very faint. On the After print, both of these lines are strong. How did Jason develop these two lines?

At the time of the first print, Jason was smoking and drinking heavily. He was unhappy and was often wondering "Can I change my life?" A new school of martial arts opened in his town and he decided to join. In the following months, he was introduced to a totally new way of life. Besides physical exercises, he also practiced mental ones and started to meditate on a regular basis. He quit drinking and significantly reduced his smoking habits.

Having found a way to really express himself physically, Jason also began to speak enthusiastically about martial arts. This is how he developed a Mercury line, denoting self-expression and communication.

His spiritual practice of meditation helped him rise above the material world and see that life had a lot more to offer. As a result a love of truth line appeared on his hand.

Like the plants he grows, Jason is flourishing and is becoming a better person. Yet, it is up to him to maintain his determination and to continue to improve. If his thinking changes again, his hands will reflect the change. His destiny is not carved in stone, it’s in his hands!

So if you are wondering "Can I change my life?", the answer is "Yes, you can!" because your life is in your hands, and they show it!
Change my life!